9 Wild Beach Party Destinations You Must See in Your Lifetime

Are you looking for a relaxing beach vacation where you can lay all day on the fine white sand, sip cocktails in a swinging hammock, swim in an uncrowded cove and enjoy the absolute silence? In that case, I’m afraid the following beach destinations are not for you.

However, if you’re a self-professed party animal who loves to try exciting water sports by day and boogie by night, then you’re in luck! From all-time famous party destinations to off-the-beaten-path backpacker surf beaches, we have a little bit of everything at any given time of the year. Hedonistic seaside parties, surfing festivals, bar hopping and liberal beaches are just some of the highlights.

If dancing the night away is your idea of a successful escapade, here’s a list of the best beach party destinations that you simply must check out at least once in your lifetime:

Bondi is so much more than one of Australia’s best beaches – it is a lifestyle! Beginner surfers flock to the southern end of the beach, while more experienced surfers looking for some powerful waves head to the northern tip. Unfortunately, its popularity also makes it very crowded, especially over the weekend.

Come evening time, Bondi Beach sees party animals come out of their den and hit the many beach clubs and bars lining the coast. But you ain’t seen nothing yet! It is on Christmas Day and New Year’s Eve that Bondi truly goes wild.

Backpackers, surfers and digital nomads gather on the beach to celebrate Christmas. There are Christmas trees, sunburnt tourists wearing Santa hats, music festivals, fireworks…you name it! Shortly after, Bondi Beach hosts a New Year’s Eve beach party that offers a different vantage point for the iconic Sydney Harbor fireworks. You can expect rad dance parties, fire shows and skinny dipping sessions in the turquoise water at midnight. Are you in?

Boardmasters Festival is an annual surfing and skateboarding party in Cornwall, England, that has earned itself a reputation as the biggest surfing & music festival in Europe. Boardmasters is a five-day event in August that is spread across two legendary locations: Fistral Beach and Watergate Bay.

Surfers and skaters compete on Fistral Beach with live music playing in the background, while the bash is held at Watergate Bay, where concert stages, food, drinks and amusement park rides await party lovers. Fistral Beach is one of the best surfing spots in the UK, home to powerful hollow waves, much to the delight of pro surfers. Luckily, there are plenty of breaks for beginners too, and the nearby Watergate Bay is an excellent beginners’ surf spot.

Also at Watergate Bay in Newquay, the Electric Beach Festival comes to life each year in June. Just as the name suggests, this is a music festival…on the beach…in summer. What more could you ask for?

Located in southeast Thailand, Ko Phangan owes its popularity to the wild Full Moon Party. Every night with a full moon is a party night on Haad Rin Nok Beach. Only half a mile long, the small cove vibrates in the sound of music as thousands of travelers from all corners of the world covered in neon paint dance to the beat.

In the town of Haad Rin, get ready for a food tour like no other, as you are invited to taste every cuisine imaginable. You can also try your hand at cooking Thai food while you’re here. And if you enjoy being active both day and night, you can go wakeboarding, paddle boarding, kayaking, kitesurfing, windsurfing, hiking to Thai temples or do yoga on the beach.

The seaside town of San Juan del Sur has gained serious popularity thanks to its long string of surf beaches and general laid-back vibe. Close to town, Playa Maderas is the most popular surfing spot, with something for every skill level. Surfing in Nicaragua is possible all year round, with the prime surfing season spanning between March and November. 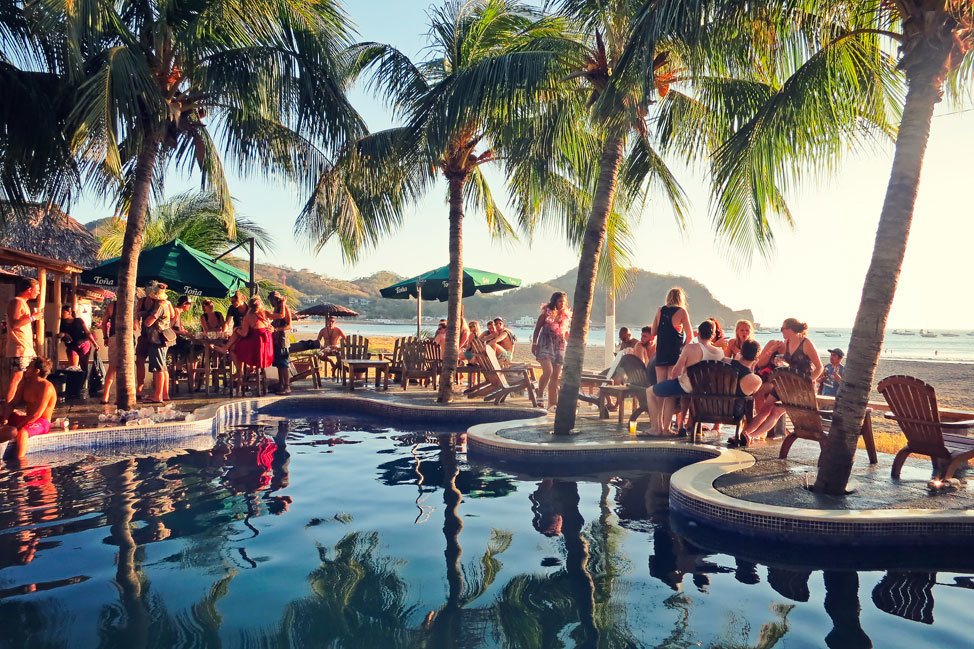 Other than the exciting water sports, there are plenty of land-based activities too. You can join a yoga retreat, do some horseback riding on the beach, go hiking or indulge in a food tour. However, one of the main reasons why backpackers gather here is Central America’s most notorious beach party – Sunday Funday!

This is Nicaragua’s answer to Thailand’s Full Moon Party, only they decided to make it a weekly thing. Sunday Funday is a pool party and bar crawl that takes people from one beachside bar to the next, where cheap drinks are served and DJs light up the atmosphere. Don’t worry, there’s plenty of fun to be had in San Juan del Sur outside of Sunday Funday, as the town is dotted with beach bars and beachside dance clubs for everyone to enjoy.

If you’re looking to combine surfing with a vibrant nightlife and exciting culinary adventures, look no further than Bali. Surfing in Bali is a year-round pursuit, with warm water temperatures every single day and great spots to explore during both the dry and the rainy seasons.

Kuta Beach is one of the most popular surfing spots in Bali, a right and left beach break with a sandy bottom that is just perfect for beginners and intermediate surfers. It does tend to get overcrowded, tough, and if you’re looking for a quiet, relaxing beach, you’ve come to the wrong place. If you’re a young party animal who loves to dance until sunrise and doesn’t mind the crowds and busy streets, then you’ve hit the jackpot!

Kuta Beach is the party capital of Bali. There are exclusive nightclubs as well as dirt-cheap bars so that any budget is well catered for. What’s more, accommodation near Kuta Beach is still relatively cheap, especially when compared to its upscale neighbour Seminyak Beach. The party scene gets cracking after sunset, with music festivals, dance parties, live concerts featuring local bands, fire and dance shows.

Mykonos is the Ibiza of Greece! The most famous Greek island in the Aegean Sea is all about partying, all day and all night.

After some kitesurfing sessions and watching the sunset from the iconic 16th-century windmills, pay a visit to the island’s iconic party beaches. Clothing is optional on most of the beaches, and around mid-afternoon, everyone gets into the groove. No wonder the island is widely acclaimed as Greece’s party capital!

With a name like this, how can you not want to go to Super Paradise Beach? This liberal gay and nudist friendly sandy cove tend to stay quiet during the day. It comes to life well after dark and does not stop the beat until sunrise.

Paradise Beach is even wilder. Things start to heat up in the afternoon, and they get really crazy after sunset. Here, Tropicana Beach Club welcomes party lovers early in the day with lounge chairs and cocktails before the real party gets started in the evening, with a hilarious MC and awesome music. Paradise Club is the place to be on this beach after midnight.

Rio de Janeiro grabs attention for a number of reasons: the Rio Carnival, the 2014 FIFA World Cup final and the 2016 Olympics are just a few examples. However, it is most famous for its lavish party scene. 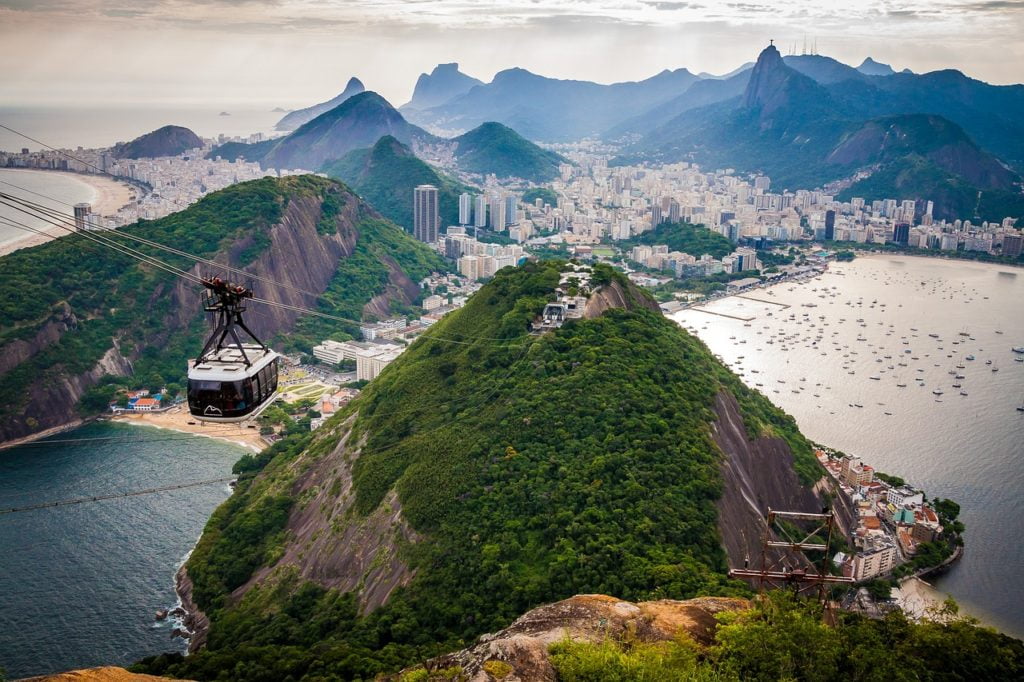 Copacabana Beach needs no introduction. An iconic beach party destination, it draws an international crowd thanks to its numerous beach bars and scrumptious street food venues that line the coast. Come wintertime, can you think of any better way to spend New Year’s Eve than on Copacabana Beach? This is Brazil’s second-biggest party after the Rio Carnival! Those who attend are dressed in white from head to toe, making the beach seem as if washed by a huge white wave.

Just like its party scene, surfing in Brazil is excellent all year round, with Southern Brazil firing up between April and September and Northern Brazil’s peak season kicking in between November and March. The best-surfing destinations in Brazil are Florianopolis, Ubatuba, Itacare and, of course, Rio de Janeiro with its stunning Copacabana Beach.

If it was good enough for Will Smith to write a catchy song about it, then Miami definitely deserves a place on our list. Often referred to as America’s ‘sexiest city’, the white-sand beaches, crystal-clear blue waters, lavish pool parties, glittering nightlife, year-round hot weather and hedonistic party boats will make you never want to leave.

Electro music lovers are in for a treat, as the annual Ultra Music Festival welcomes elite DJs from all around the world to shake the city. Throughout the year, South Beach is the party hotspot, with exclusive clubs and wild parties every week. However, you’re bound to find a sexy beach with a steaming hot party just about anywhere in Miami.

During the day, you can go paddle boarding or kitesurfing. While the surf may be flat at South Beach most of the year, when a swell does hit, there are hollow, fast and powerful A-frame waves that are well worth the wait. Hurricane surfing is a thing here on the US East Coast, and daredevil surfers often draw the attention of the media when they risk almost certain death to ride those foamy waves. 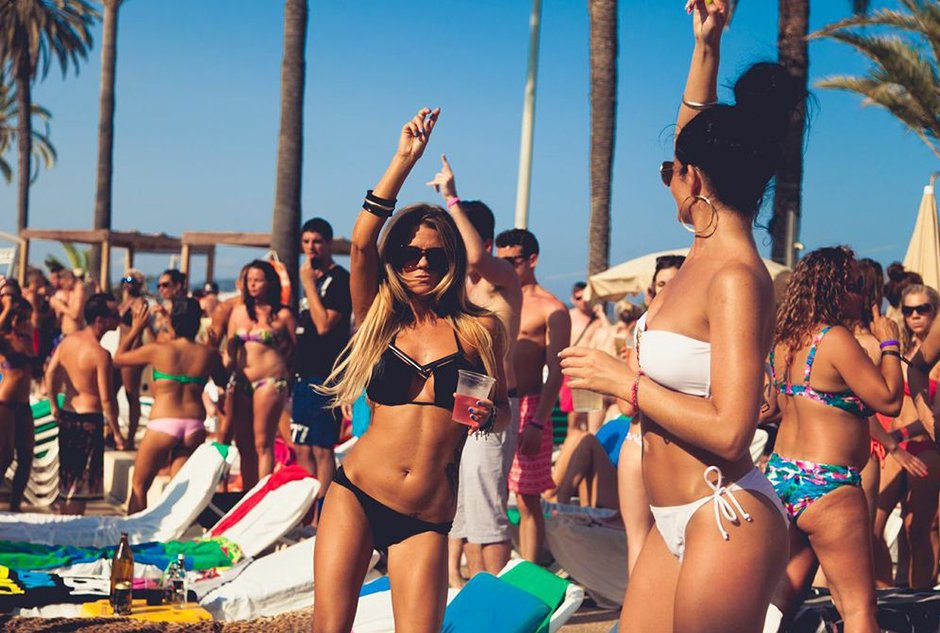 Back to the island

We’re gonna have a party

In the Mediterranean Sea.”

If the Vengaboys’ ’99 party banger is not enough to convince you to visit the sexy Spanish island, perhaps I can. With beach clubs in full swing every single day of the year, crazy pool parties, dance sessions on the beach and a bustling electronic music scene, it should come as no surprise that Ibiza is considered the beach party capital of the world.

There are over 80 beaches on the White Isle, and each of them has its own lavish party scene. Celebrities from far and wide get together at Cala Jondal, a classy beach in a secluded bay. Ibiza Town, the capital of the island, has a lively nightlife that is beyond legendary. Just outside Ibiza Town, Playa d’en Bossa boasts the longest beach on the island, Ibiza’s very own South Beach, while the popular crescent-shaped beach of Las Salinas attracts a varied crowd of young folk, from hippies and families all the way to celebrities.

What else can you do in Ibiza when you’re not partying? Watersports, of course. The crystal-clear waters make for the perfect playground for scuba diving, paddle boarding, sea kayaking and cliff diving.

If you’re looking to stay active by day and party by night, then a surf camp for solo travellers to an exotic beach destination might be just the thing for you!

Underrated Cities in Europe To Visit In 2020

Greece: one of the world’s largest open-air museums