8 Must Visit Game of Thrones Locations in Croatia 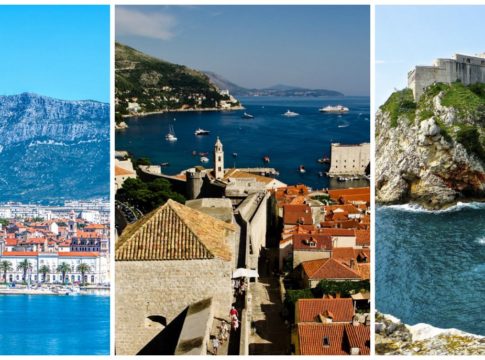 ‘Game of Thrones’ – The most watched show on the planet, is here, with a new season. As the show gets more dramatic and interesting with major twists in every season, the curiosity of the fans of Game of Throneso trace the beautiful locations where the episodes have been shot has also reached a whole new level.

The devoted fans are looking all over the internet to ‘experience’ these locations – to soak in the gorgeous destinations while feeling like being a part of it, and this has opened up a lot of amazing destinations in Europe for the travelers, which were hidden gems until now.

Croatia is the country where most of the popular episodes have been filmed. Dubrovnik, the elegant city blessed with stunning landscapes and enriched with history has the majority of these locations.

Join us as we take you through the virtual tour of the 8 Game of Thrones filming locations in Croatia. King’s Landing is the capital of the fictional seven kingdoms. A coastal city with astounding views, this place is the power house, which witnesses many events including King Joffrey’s name day tournament.

King’s Landing is the city of Dubrovnik in Croatia. Known as ‘the pearl of the Adriatic,’ the old walled city area overlooking the spectacular Dalmatian coast has been a perfect place for the drama to unfold.

The Black Water Bay, which is shown from the top of the walls of the King’s Landing can be viewed by taking a tour in the old walled city of Dubrovnik. Most of the areas in the walled city can be traced to the scenes that were shot and can be photographed too.

It takes about 3 to 4 hours to stroll along the streets of the old city, including climbing the stairs for a bird view of the Bay.

Recommended read:  Why is Croatia The New Digital Nomad Hang out? Located on a rock at 37 meters high, Lovrijenac Fortress commands the attention of the travelers automatically as soon as they step into the old walls of Dubrovnik.

The tournament on Joffrey’s name day ceremony and a few scenes including the one with Cersei and the other Lannisters have been filmed at this fortress.

Climbing the steps would lead you to witness a stunning view of Dubrovnik’s skyline overlooking the Adriatic sea. Passing through the Ploce gate leading to the main street of Stradun, you will see a labyrinth of lanes flanked by stone houses. This is the famed St Dominika Street, where many scenes of Game of Thrones including the one where the sparrows preach the civilians of King’s Landing have been filmed.

The streets are perfect to stroll around after a climb to the top of the Bokar and Lovrijenac fortresses.

Little ahead of this street lies the popular Jesuit staircase, the venue where the public shaming of Cersei takes place. It feels mesmerizing to see how well the Great Sept of Baelor, which is beautifully designed using the CGI technology in the show fits right in front of this staircase. Remember the scene where the Khaleesi visits the House of the Undying on her quest to find her dragons? Well, the tall tower surrounded by the cobbled lanes is the tower of Mineeta, from where the King’s Landing is visible! You can visit the exact passage where the scenes were filmed along with watching the bird view of the Adriatic coast line in Dubrovnik.

You can visit the exact passage where the scenes were filmed along with watching the bird view of the Adriatic coast line in Dubrovnik.

Qarth, the city where Daenerys meets the spice king at his palace is located 600 meters from the main city of Dubrovnik at Lokrum Island. This island dates back to 1023 and thus looks as fascinating as it is showcased in the show, where you get to see the vibrant coastline of Dubrovnik on the horizon.

This island dates back to 1023 and thus looks as fascinating as it is showcased in the show, where you get to see the vibrant coastline of Dubrovnik on the horizon. The beautiful palace gardens that can be seen from Red Keep in King’s Landing in the episodes where Sansa and Lady Olenna Tyrell takes place, and also the conversations between Sansa and Margaery occur are the sprawling gardens of Trsteno Arboretum, located away from the main city of Dubrovnik.

Built in the 15th century, this garden has been home to some of the world’s ancient species of trees. It is also the oldest arboretum in this part of Europe.

Don’t worry about food or drinks while you plan to explore all day in Dubrovnik. The city has many excellent restaurants, cafes, and bar, some of them in the old city with beautiful views of the skyline.

If you wish to try some delicious steaks or just want to dine with the views of the old harbour, you could visit Gusta Me. And Culture Club Revelin is a great place for some night life that goes on until early morning when there are concerts or performances.

Recommended for you:  Top 10 Co-working places in Croatia for Digital Nomads Split, the second largest city in Croatia is the other location in the country where Game of Thrones series has been filmed. The two popular ones are: If you wish to locate the throne room of Queen Daenerys, the mother of Dragons and the place where she trains her beasts in the basement, head straight to Diocletian’s Palace in the city of Split.

With a 1700-year old history and once a prominent place for Roman settlement, this magnificent palace looks befitting for the queen and her dragons. Meereen, the former kingdom of slaves which Daenerys visits to conquer and out throw slavery is located a few meters away from the main city of Split. The enormous Klis fortress overlooking the city view and surrounded by the ancient walls has a lot to offer for the travelers.

If you want a complete mapping of the fictional places with the actual locations, Telegraph has it for you. Check this Game of Thrones filming locations travel guide to plan your GoT quest!

Most of the guided tours are good and cover all the Game of Thrones filming locations in different parts of the world.

If you fall in love in these Croatian’s cities (we bet, you’ll, deeply!), why not find your vacation ‘home’ with us in Croatia?

Check where we are to help your life a living adventure!

Have you traveled to these shooting locations? Which is your favorite and why? Let us know!