Despite its small size, Italy is a very diverse country, especially noticeable when comparing north and south. Some would argue that, compared to their colleagues in the south, the cities in northern Italy are affected by globalization the most which affected their authenticity. But we do believe that it does relate more to major cities like Milano or Torino, rather than to much smaller ones that we are going to cover in this guide. Cities like Treviso, Trento, Parma, Udine and many others still managed to maintain their authenticity, and provide a good mix of developed and globalized Italy with an extremely breathtaking alpine nature and charming lakes, the perfect setting for digital nomads looking to explore Italy.

All of this comes together with quite affordable prices throughout the whole region. A coffee in a nice Italian coffee bar would cost you around €1.5 while the beer in a local neighborhood pub would cost you around €3.5. And when it comes to dinner, €15-€20 should be enough to have a nice dinner in an inexpensive restaurant. The region is really well connected with a lot of high-speed trains connecting all the small cities to each other and to the major ones within an hour or two for around €7-€15. The rent rates are also similar throughout the region varying between €400-€600 in general. There are many cities in Northern Italy that are worth attention,  and we’ve done our best to pick the most balanced options. 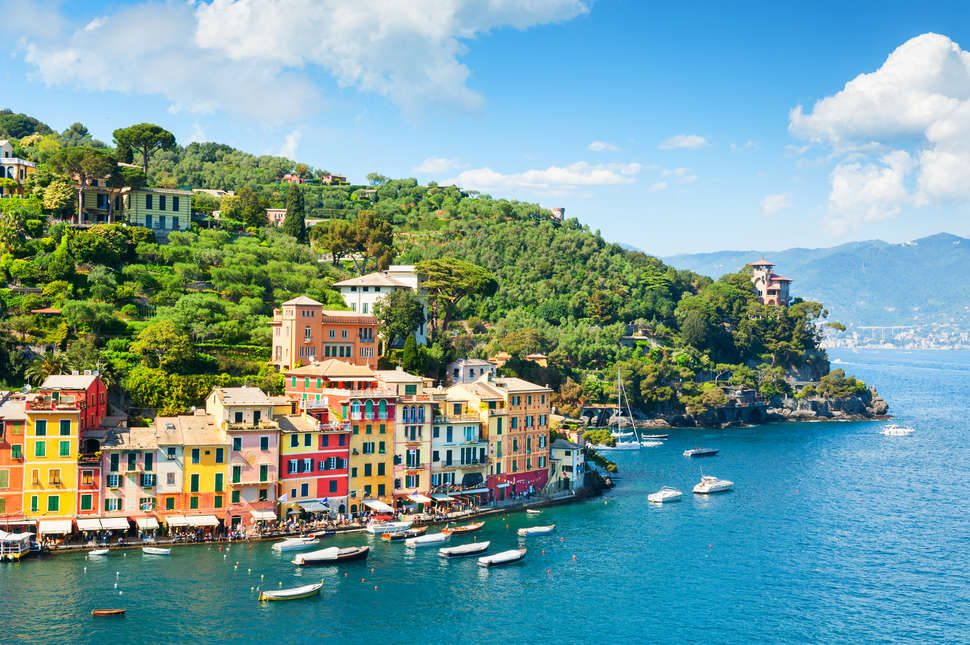 Described by Dante as “the place where the Sile and the Cagnan go hand in hand, it’s a charming town in Northern Italy. These two beautiful rivers run across the town and come together to circle the town. Yes, it is in the Veneto region, the same region where glamorous Venice is located. In terms of tourism, it always affected Treviso negatively, which is no surprise, not many cities can compete with its charming neighbor Venice.

But Treviso has still a lot to offer with its calm and tranquil atmosphere instead of camera-clicking crowds and overwhelming prices of its giant neighbor. The town is home to the clothing empire Benetton, which has a large store behind the Palazzo dei Trecento in the town center. 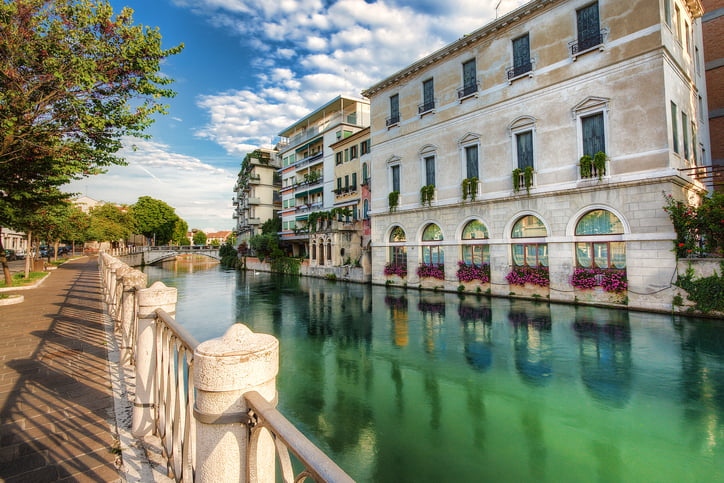 Just a genuine seasonless Italian town – not reliant on tourism – and a perfect place to fully understand and soak in how people actually live in the north of Italy.  Average rent for a 1 bedroom apartment or a studio varies between €400 – €600 and despite of its small size has several coworking spaces to offer as well.

Ground Control offers shared workspace, a private study, a meeting room, a conference room, a photo studio, a library area and a relaxation room with a kitchen. They also organize conferences, workshops and training courses mainly oriented to the world of start-ups, but not limited to. You can find all the spaces and events on their website. Another good alternative is Bwork. It’s a relatively new coworking space, about 10 minutes away from the city center. They do organization of events and meetings with all the services of a 4-Star Superior hotel.

Formerly part of Austria-Hungarian empire, Trento became a part of Italy in 1919 and is considered to be one of Italy’s most prosperous cities these days. Trento used to be a village inhabited with Celtic people before the Romans conquered it in the very first century BC.  It is worth admitting that its history affected its very charming and unique appearance and architecture, where the traditions of the Renaissance and German Gothic are intertwined and mixed together.

Beautiful Lake Garda is less than an hour away, a place where Nietzsche and Kafka used to relax. It would safe to assume that this place had a lot to offer with its nice mixture. Despite its small size Trento is home to one of the biggest and most important public Universities in Italy, so it’s considered to be a relatively “young” city. The average rent for a 1 bedroom apartment or a studio varies between €500-€600 and despite of its small size has several coworking spaces to offer as well. 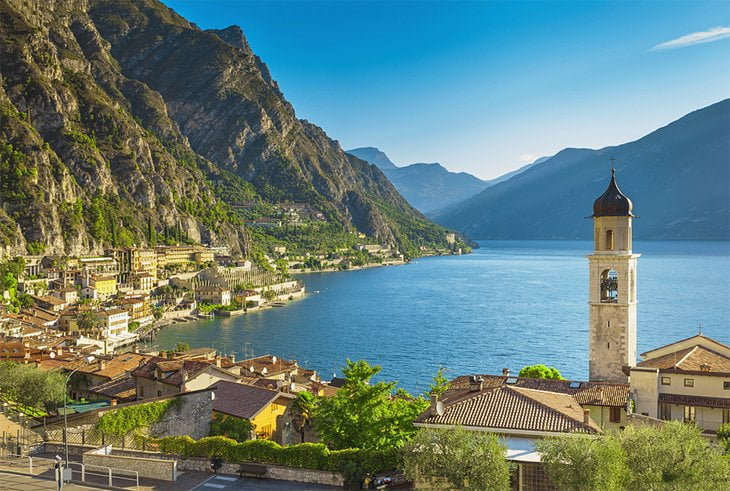 The most popular coworking space is considered to be Impact Hub. They have different membership package options with affordable prices starting from €70 per month and more. You can use Hub as an office for your business, you can meet customers, organize meetings and meetings, here you can also relax, read, cook and drink a good coffee or a cup of tea, but above all, you can get in touch with the local and international network of Impact Hub.

Another good alternative near the center is Trento Lab. They do also offer different midterm packages. This one could be a nice option in the cases when the Impact Hub becomes overcrowded since it’s less famous due to its smaller size.

Probably the most important town in northern Italy, although it is not much known to tourists. Like its other far northern neighbor city covered above, Udine also has a long history with diverse influences throughout the time, such as Venetian, Austrian and a bit of Slovenian, still having some signs remained that are written in Slovenian.

People here speak their local language Friulano.  Despite the fact that it has been affected by natural disasters and invasions, the city still managed to preserve the flavor of the city and the historic center. As in the rest of Italy, Udine has a lot of unique things to offer for food lovers as well. The local traditional ‘aperitivo’ is called a tajut, and one of the best places to enjoy this is Piazza Matteotti. 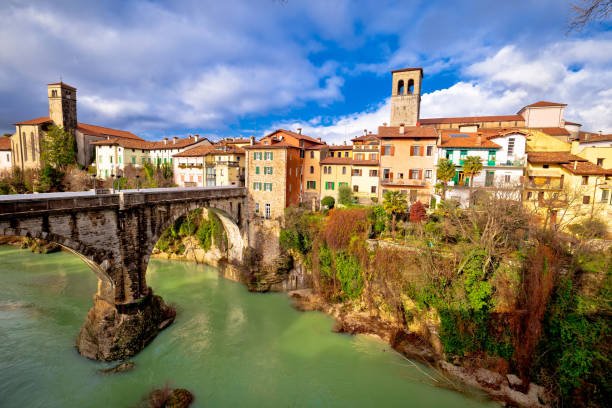 It’s a charming small university town with a good mixture of several influences but still reflecting the Italian culture,  in a slightly different way. The average rent for a 1 bedroom apartment or a studio varies between €400-€600 and despite its small size has several coworking spaces to offer as well.

In the very heart of the city there is a really nice coworking space called Lino’s and Co. They organize workshops, conferences, and events in order to fuel creativity and interconnection and also provide coaching and mentoring support for enterprise development. And the rates are quite friendly with less than €100 per month for a shared workspace in the open space. A bit smaller alternative, also in the center is Cowo Udine Centro, with about 9 workplaces available in total.

Thinking about Lombardy the first thing that comes to one’s mind is usually Milan. The most developed, globalized and prosperous city in Italy, with the highest GDP and all the statistics that go along with it. Milan or Milano – how it is called locally, is undoubtedly the finance, fashion and design capital of Italy and is not a revelation for anyone, but its smaller neighbor Bergamo probably could be.

It’s a relatively small town, but the third biggest in the region of Lombardy after Milan and Brescia. Bergamo is structured in two levels, providing a good balance for any type of visitor. The first level – called lower city is considered to be more modern and the second level – called upper city is “responsible” for history, being home to the city center with historic old buildings, museums, and monuments.

Even though there are a lot of specific things to do in Bergamo, but wandering through the narrow streets randomly and soaking up the culture and the atmosphere could be the best thing to do. If you need an event or a show to boost the energy Milan is less than an hour away and the train ticket will cost you about €6. Perfect calm and charming alpine town with a slower pace but a lot to offer.

The average rent varies between €400-€600 and Lombardy being the home to the majority of Italian startups, Bergamo is well equipped with decent coworking spaces as well. Talent Garden and Studio 12 are among the most well-known ones.

Como is another really interesting small town in Northern Italy, in the same region of Lombardy, even closer to Milano than Bergamo, but being a bit smaller in terms of population. Being home to probably the most famous lake in Italy, Como is not that of a hidden gem compared to its neighbor Bergamo, but still not among the mainstream destinations and never fully crowded, still maintaining its tranquilness.

In terms of monuments and museums, you won’t feel short of either. Gothic Como Cathedral is the main monument in the town, and one of the most important buildings in the whole region. It is assumed to be the very last Gothic Cathedral that was built not only in the region but in the whole of Italy. 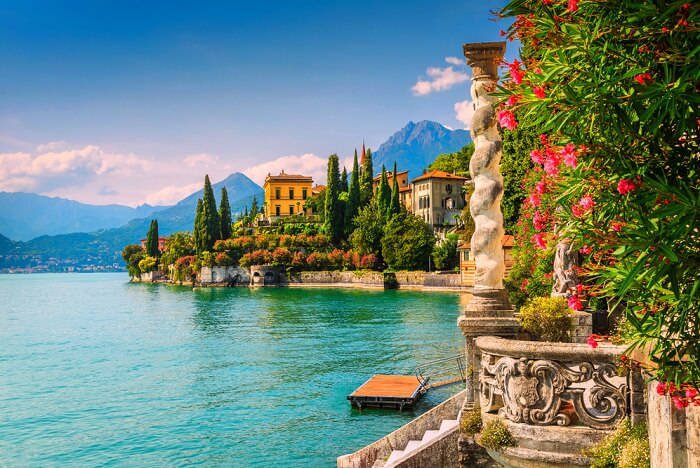 This small town, located on the Italian and Swiss border is mostly known for its breathtaking nature together with the beautiful lake. Even George Clooney and Madonna couldn’t stand the beauty and bought a vacation house here and you shouldn’t too, I mean stand the beauty, because buying a house is not a necessity, at least staying and renting for a month or two before that big of a commitment could be a safer option.

The rent varies between €400-€600 and if you pay up a little more you can end up in an apartment with a nice view of the lake. Apart from its neighbors’ coworking spaces are not that abundant here, Opificio Zappa being the main one. But do not let this fact prevent you from giving Como a chance, there is a wide range of options with nice cafes with wifis spread near the lake’s shores.