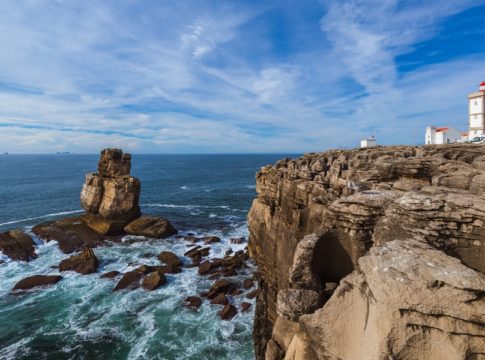 History, culture, food, wine, and a thriving startup scene are just some of the reasons why you should visit Portugal. With 1,114 mi coastline, this small country has amazing natural sights that will make you want to prolong your stay!

To continue our series of blog posts presenting the ‘Digital Nomad’s Guide to Portugal’, we picked a few really interesting coastal towns in the country, where you can relax by the beach, enjoy some great seafood and even go surfing. They are Aveiro, situated on the shore of a lagoon, Aveiro is a maritime city known by its canals navigated by colorful boats; Figueira da Foz, a popular beach resort town located halfway between Lisbon and Porto; and Peniche, seaside town and one of the largest traditional fishing ports in the country.

This charming city has a really rich history with unimaginable hardship but also flooded by immense wealth. Today, Aveiro embraces its history and deep-rooted heritage, to create a fascinating destination for tourists with a good-looking center and a youthful, energetic buzz.

Known as the Venice of Portugal, Aveiro is crossed by a network of canals through which moliceiros (local boats) meander. These slim, colorful vessels used to be used to collect algae and seaweed, and today are for sightseeing trips, during which you can also spot a number of Art Nouveau buildings situated along the main canal. You can always book it when you’re there, but in case you like to plan things ahead, you can book your boat ride with Sentir Aveiro.

If food is an important part of your travels, Aveiro has a typical desert that you might really enjoy. Called “ovos moles”, it is made with eggs and sugar and sold in wooden barrels or wrapped in a crusty wafer in different shapes. The best and most traditional one you can find in Confeitaria Peixinho, be sure to go there! 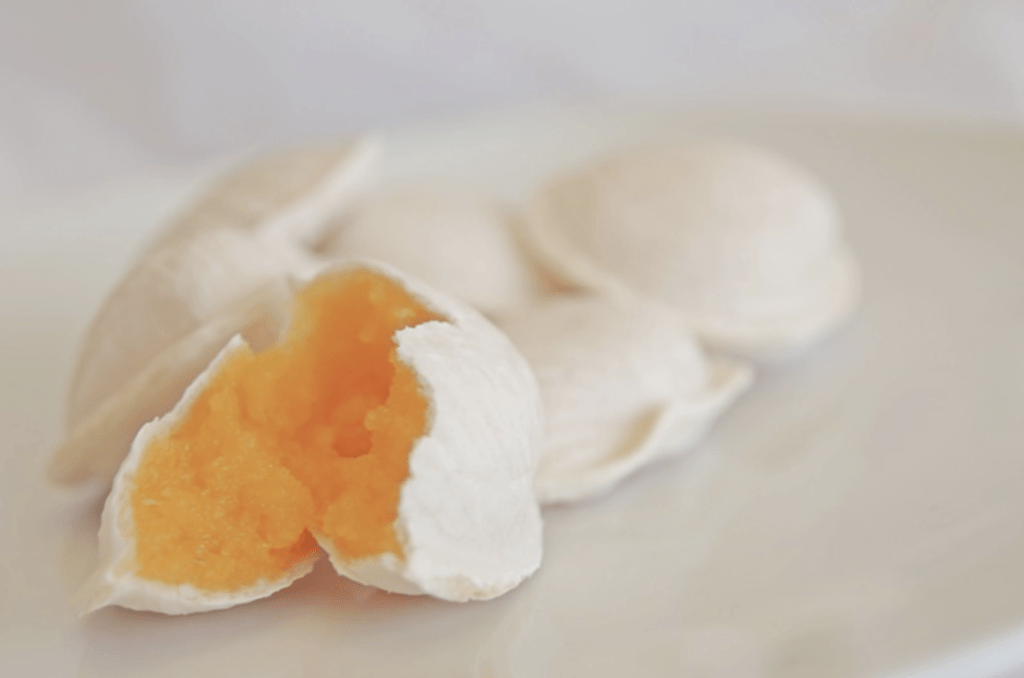 Another great attraction is Mosteiro de Jesus, a monastery with a royal connection and replete with religious art in its museum. And in case you’re not really into museums, the Atlantic is also on your doorstep and you’re minutes away from sandy beaches and the adorable little resort of Costa Nova.

On the coast not far from Coimbra, Figueira da Foz is a resort town located halfway between Lisbon and Porto with an expansive beach and many interesting landmarks. With lots of palatial holiday homes, one from the 17th century for the Bishop of Coimbra, and others in the Art Nouveau and Art Deco styles, the city first came into fashion as a resort over a century ago.

For most visitors, the star attractions are Figueira’s amazing wide beach and Las Vegas-style casino. Out of season, the town has a more tranquil charm, but thanks to its many restaurants and bars it’s not a lonely experience and the weather is really pleasant for at least 10 months out of the year. And in case you want to get some work done while enjoying a delicious typical Portuguese breakfast, you can go to Pharmacia (in English pharmacy – LOL) a nice café/ tea house that will offer you some peace and quiet while enjoying great food. 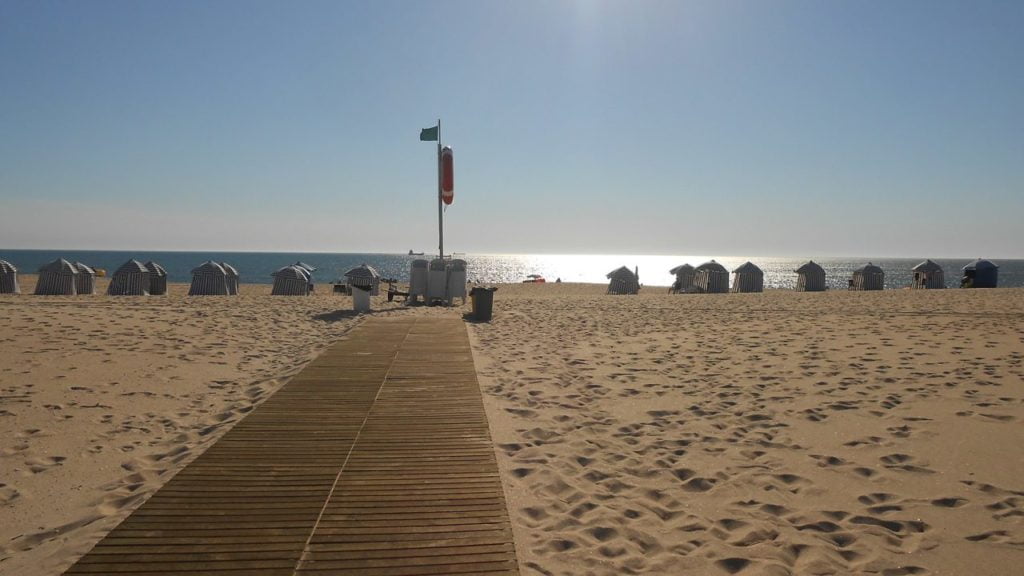 Dominating the horizon to the north there is also Serra da Boa Viagem, an inviting range of pine-cloaked hills with scenic viewpoints, walking trails and a woodland adventure park. From the charming town center to the panoramic hills and the local heritage, Figueira da Foz has a lot to see and do to keep visitors happily busy. And in case you’re up for a day trip, a train trip to Coimbra takes about an hour and it will cost you less than €3 euros each way.

And if you’re into festivals, every year Figueira da Foz hosts the RFM SOMNII, an electronic music festival right by the beach. I guess it can’t get better than that right? The three-day line up was a major hit this year and in case you want to plan ahead for 2020, you can already join the waitlist!

To think about Penich and not think about the sea is basically impossible. One of the largest traditional fishing ports in Portugal and a major Atlantic hub for maritime attractions, the city has developed into a popular tourist destination due to the wonderful beaches that surround the town. These beaches have some of the best surfing waves in Western Europe and most visitors to Peniche are here either to surf the famous tube waves or to learn at one of the many excellent surf schools, such as Go4Surf, one of the most popular in town.

In addition to fishing and surfing, which has always been one of the sources of income of its people, Peniche is also known for the art of bobbin lacework, perfected by the women while the men were out at sea.

And if you have the time to stay for a bit longer, a day trip to the Nature Reserve on the Island of Berlengas is a boat ride away. Its translucent waters are ideal for divers, who will find here a natural sanctuary for sea flora and fauna. The choppy sea and the seclusion of the Island have also prompted many mysterious stories about fishermen and sunken vessels off this coast. And if you’re looking to do some activities, you can enjoy a stand-up paddleboarding tour of Berlengas as part of the trip to the island. 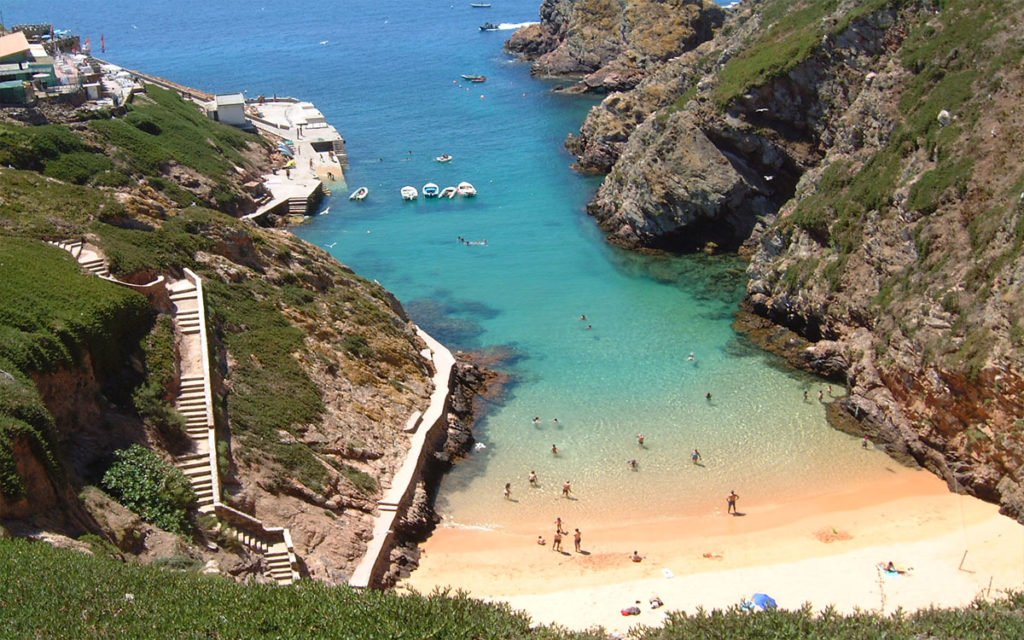 It’s only natural that the sea dominates the local cuisine, so you mustn’t leave Peniche without tasting the bouillabaisse, the seafood rice or the charcoal-grilled sardines, always accompanied by the Western region’s wines. For dessert, we recommend the almond cakes, whether an “Amigo de Peniche” or the biscuits called “Esses”.