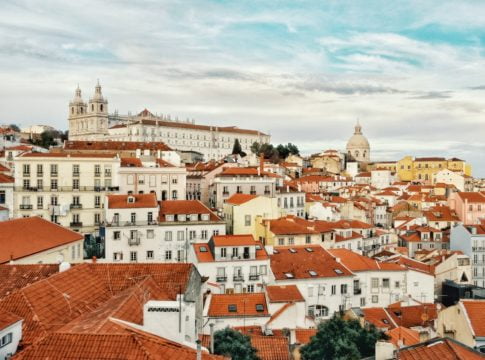 Europe is home to some of the most influential cities in the world. A European country might feel huge due to its rich culture and infrastructure, despite being very small in terms of actual size compared to some countries in South America or North America. The fun part about Europe though is that you just need to catch a train for a couple of hours and you’ll find yourself in a totally different culture. For travellers and digital nomads this is very interesting and a culture shock every time you move country. And if a 6 hours train ride is not for you, planes around Europe are the cheapest in the World and it will probably take you about 2 or 3 hours to almost cross the entire continent. However, some cities might be a bit more equipped to host the remote and laptop lifestyle and those are the ones we considered on our list of best Digital Nomad Hubs in Europe. 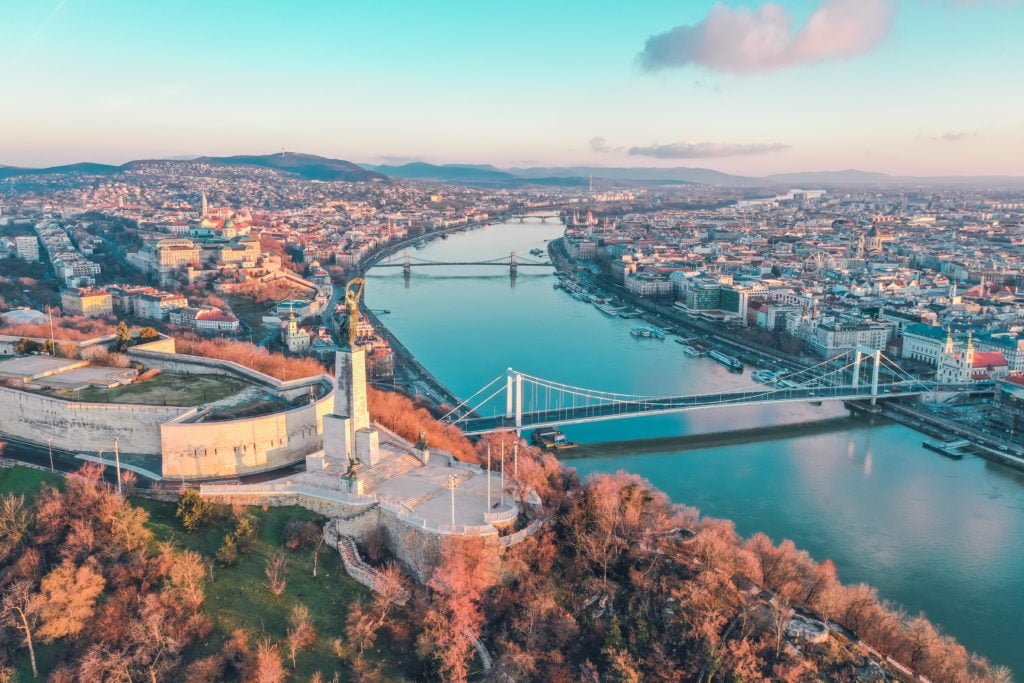 Vienna is a museum by itself. Everywhere you walk and everything you step into will inevitably fascinate you. There are a thousand things you can do in Vienna from appreciating the vast amount of authentic street art to losing yourself inside the incredible Schonbrunn Palace.

The transportation is very efficient and nothing is ever late. You can get to any point of the city and even to places further away in a matter of minutes. There are bike lanes on every street, which makes it easier to ride a bike around in such a busy city. Speaking of bikes, Vienna has one of the best bike-sharing systems in Europe – City Bike Wien, which offers one free hour every time you start riding a bike and the hourly rates are pretty affordable for such quality. 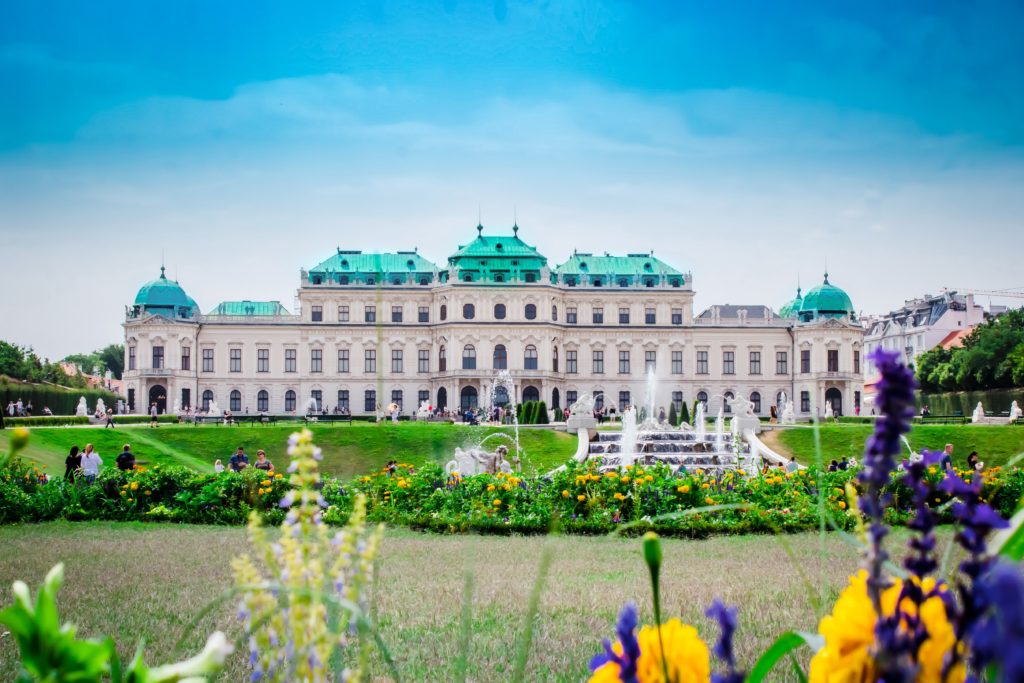 For a Digital Nomad, this city is a breath of fresh air. The people are very open-minded and kind, it is one of the safest cities in the world and highly-ranked for Digital Nomads. There are all kinds of alternative shops, coworking spaces and activities going on for any type of person, such as the impressive “Naschmarkt” market, where you can find restaurants with all types of food from all over the world!

Geneva is known by many as the Capital of Peace. When we think of Switzerland we think of green surroundings and beautiful landscapes and Geneva does not stay behind on that for sure. It is one of the greenest cities in the entire European continent due to its enormous amount of public green parks in the city and the quality of life is truly appreciated by fellow travellers and local citizens.

The city might be very expensive but it’s considered by many to be one of the best Digital Nomad hubs in Europe. It is a land of opportunity as the tech scene is very developed, since it is, not only geographical epicentre in Europe but also the Entrepreneurial one. 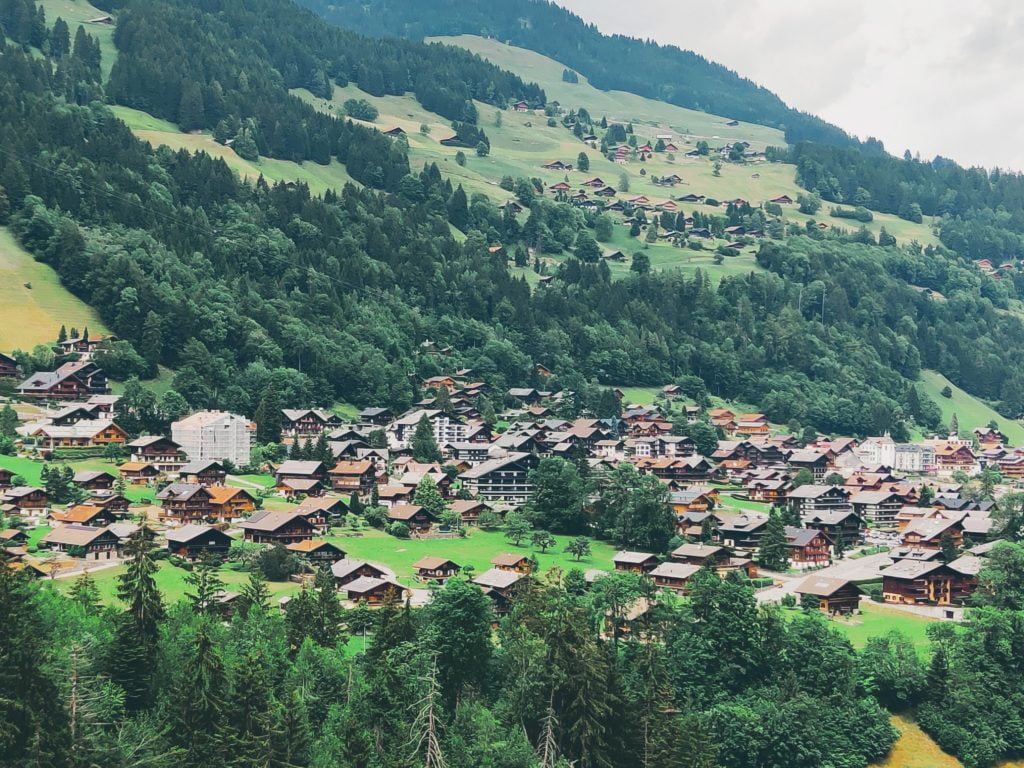 People of Geneva are known for being very open-minded and helpful. The city has a huge diversity of activities, from museums and theatres to simply walking across the astonishing shore of the crescent-shaped Lác Leman lake which borders France.

Porto has been named best European destination twice in very few years. In just one decade it grew massively in popularity and it’s one of the most desired destinations for travellers all over the world, which is not surprising at all. Porto is shaped in a very unique way, without losing its Portuguese essence.

The D. Luís I bridge that connects Porto and Gaia across the Douro River is one of the most beautiful sights in the world. No one can resist to stop by and take a picture next to the shore with the bridge in the background. Porto has also become very popular for startups to settle their offices. Big businesses like Revolut and Farfetch have built their offices in Matosinhos and the city is now becoming one of the biggest business hotspots in Europe. 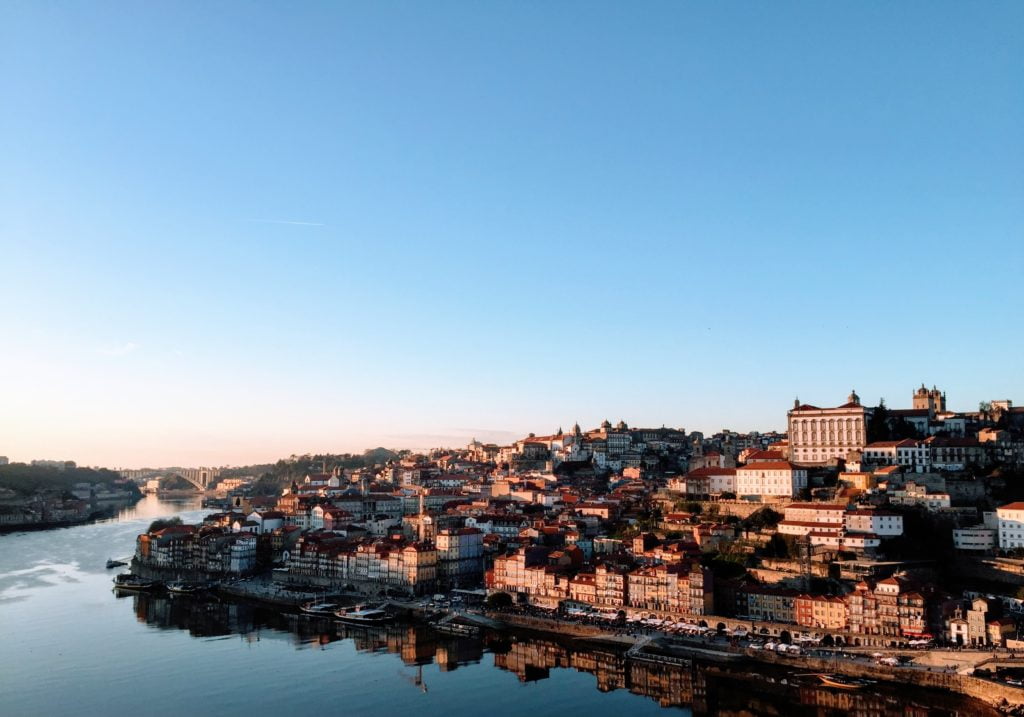 A big number of Digital Nomads choose to spend some time in Porto because, despite being a very touristic city, it is huge and there’s a lot to see and explore. Not only that, but compared to other European countries, it is fairly cheap. Also, the amount of CoWorking and CoLiving spots are endless. There’s a huge international community in Porto and it’s likely that it will just keep growing.

In Braga, a city a few kilometres from Porto is also one of the most unexpected digital nomad hubs in Europe, due to is size and location. However, the city has been transforming itself to accommodate the tech world and the remote working lifestyle, as we mentioned in our previous blog post.  For those of you considering Portugal as your next destination, we have a very interesting house where you could enjoy a very calm stay while being very well connected to the city. We also have a One Bedroom apartment in the historic city centre of Guimarães, again very well connected to Porto.

An interesting city split in two by the River Danube – Buda and Pest. Buda is the hillier and calmer side and it’s where you will have the best views and home to some of the biggest attractions such as Citadel and Fisherman’s Bastion, which is part of the Castle District. However, Pest is the side where everything is happening, from the nightlife to most of the attractions such as the Szechenyi Baths, the Parliament Building and St. Stephen’s Basilica. 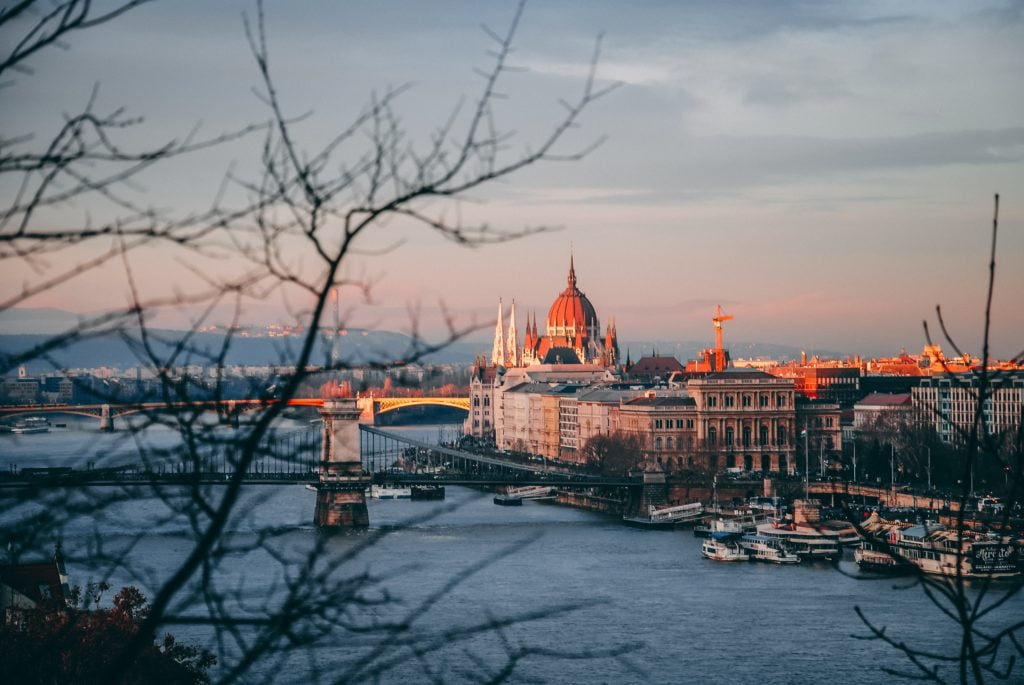 This combination brings to us one of the most influential and unique cities in Europe – Budapest. The city is one of the most famous Digital Nomad hubs in Europe, as it is one of the cheapest capitals in the continent, it also offers great wifi connections, amazing cuisine, a very pleasant vibe, beautiful architecture, plenty of working spaces and the safety levels are over the roof.

If you are looking for the best of both worlds – peace in Buda and movement in Pest – this is where you should go to. GoGoPlaces can actually offer you a very pleasant stay in Szar, a few kilometres from Budapest, away from all the buzz but easily connected to it.

Prague is the heart of Central Europe. Beautiful, romantic, mysterious, old – you name it, Prague is everything and more. There’s something new for you every day while all you have to do is wander around the cobble little streets and just let yourself get lost in the city. Take the time to truly dive into an experience that you’ll never forget. From going from museum to museum and stopping in every little shop to getting yourself into the most unique bars with some of the greatest beer in Europe. 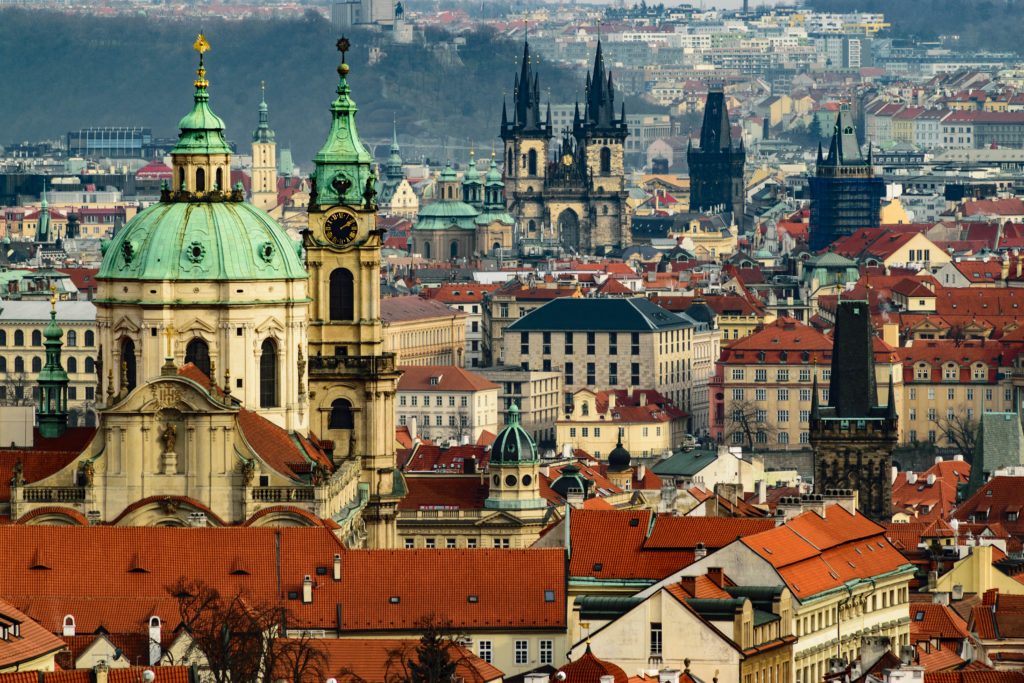 Despite being a quite expensive city regarding accommodation, it can get pretty affordable the further away you move. And moving around Czech Republic is quite easy, as you can travel from North to South several times a day due to the very efficient national transportation system. Companies like Regiojet and Flixbus will be your best friend in exploring and getting on the move.

For Digital Nomads this is an ideal location to be. It’s very easy to find places with the necessary conditions to work and most necessities are affordable if we compare to Northern and Western Europe.

The only city sitting between two continents – Europe and Asia, Istanbul is home to many Digital Nomads and they are quite right for choosing it as a place to settle.

Istanbul is a very well connected city because of its two influential airports and Turkish Airlines, the largest carrier in the World. You can reach any place in Europe and Asia very easily with reasonably inexpensive fares. 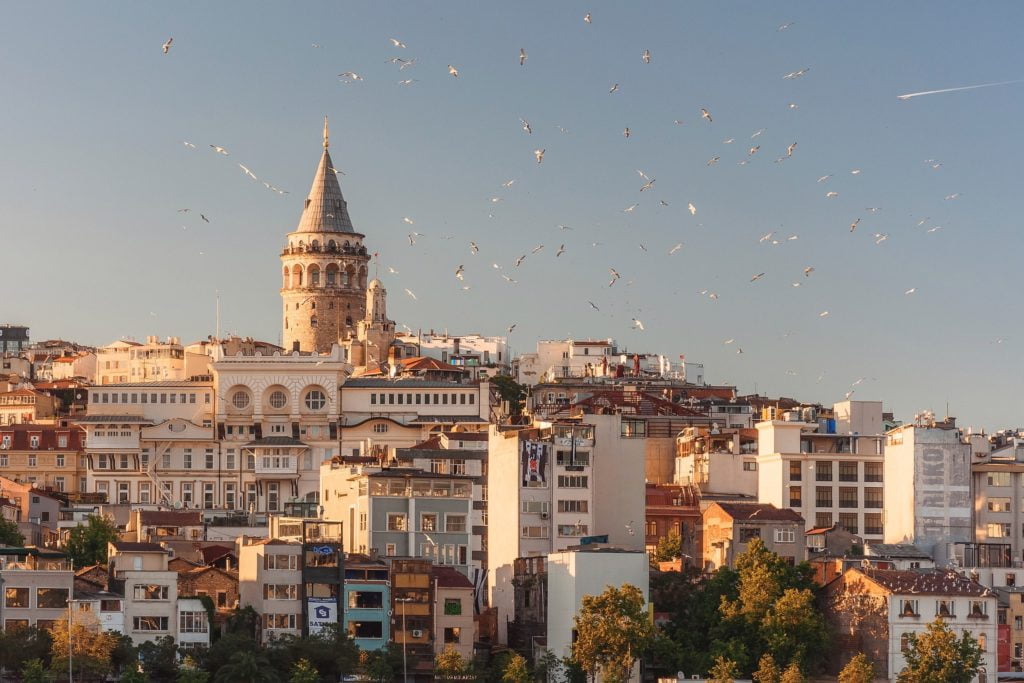 Another great advantage is the great decline of the Turkish Lira in the last couple of years. Right now, 1 dollar equals 5,73 TL and 1 euro equals 6,34 TL. This means that the country has never been so affordable as it is now. Due to this scenario, everything is extremely cheaper compared to the rest of Europe. This means that living in Istanbul is also not a problem for a Digital Nomad because, just like everything else, it will be pretty affordable. In Istanbul, you can also find plenty of coworking places, where they serve you great Turkish food.

Here is a great example of a city that embraced the Digital Nomad community with arms wide open. For a Digital Nomad, Lisbon can be considered the dream destination for many reasons.

Despite slowly losing its cultural charm due to the city trying to adapt to the enormous rate of tourism, Lisbon is a paradise for Digital Nomads. There’s all kinds of coworking spaces that you can find – luxurious, cafes, simple offices, anything! It is a meeting point for people from all over the world, not only to just have a little fun but also to do business.

Lisbon has everything that you could wish for such as diversity in nightlife, great beaches and surfing spots, amazing cuisine, beautiful parks to relax and very impressive architecture. Besides that, there are also all kinds of activities and events happening in the capital of Portugal. It is by far one of the most active cities in the continent and it has become one of the most popular digital nomad hubs in Europe. 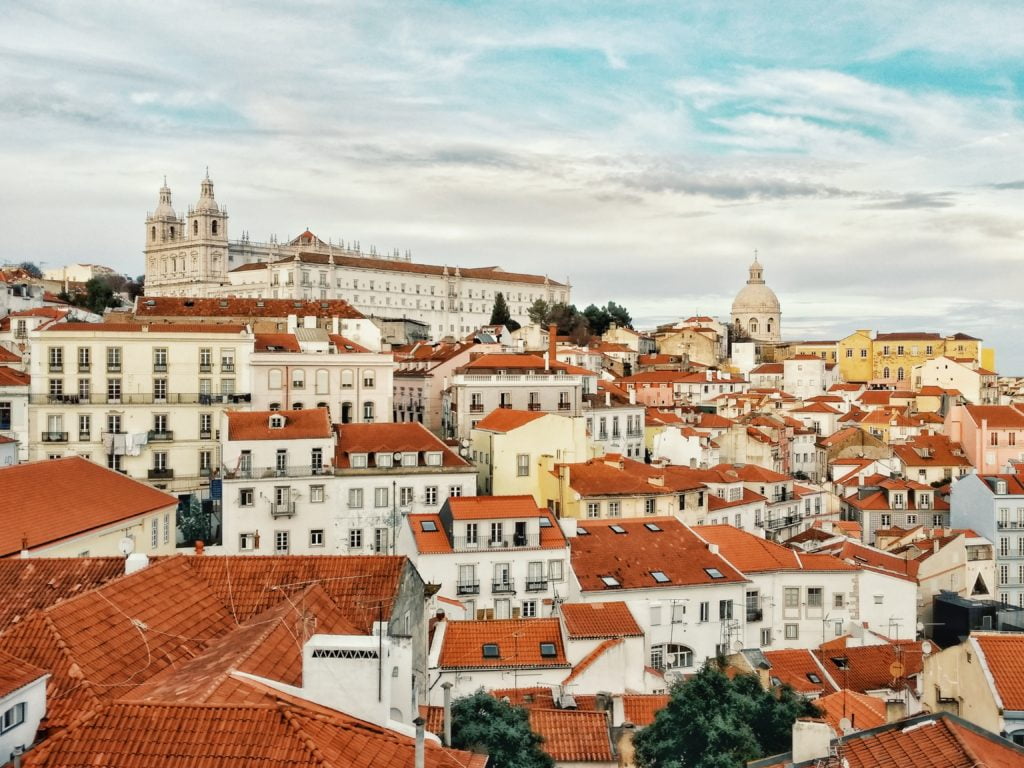 However, besides all these great advantages, it can be expensive to live in Lisbon depending on where you want to live. But we guarantee you that it’s worth every single penny after all the fun you will have in this vibrant city. If you still want to experience Lisbon but would like to have a more affordable option, at GoGoPlaces we can recommend you two great options!

Estoril is a city in the district of Lisbon and very well connected to the city centre. Also, you just have to walk 10 minutes to get to a great beach! Check out this studio if it sparked an interest in you. If you more of a nature lover, we have another option in the green city of Sintra. Also very well connected to the whole district of Lisbon, this country house is also very close to the beach and to some of the best surfing spots in Portugal!